I don’t have a mom. Not to get all sappy but, as I mentioned in my first post, my family has a bit of a longstanding relationship with cancer, and my mom was one of its unlucky acquaintances. 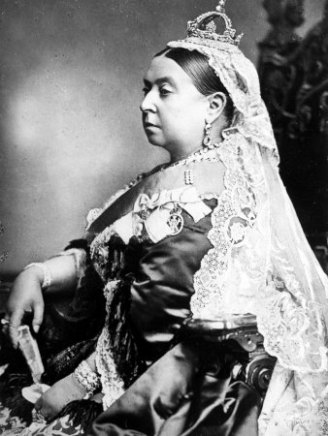 Bad metaphors aside, that means that I’ve had a particular opportunity to get to know my “other mother”: my mother-in-law. A.k.a.: Nana. For those of you who don’t have one, “Nana” is  a common pet name for a grandmother in England.

And with Mother’s Day just behind us, and Victoria Day ahead — Queen Victoria was mum to nine (!) children (and 85 grandchildren !!) — it struck me that Nana and Victoria might have had a few things in common.

Let me tell you about Nana. Her name is Cynthia, and she was born in the Midlands in 1940 when the country was having the snot bombed out of it by Germany. Her father worked in a factory, and her mother was in service — which means she was a maid. In fact, her father was an exceptional amateur artist, a talent that was wasted cleaning the inside of industrial vats, which he left school to do at 14; her mom, meanwhile, used to fill in as a local substitute teacher, and would have excelled at it had she the education and opportunity.

As a child, Cynthia loved sports, and played whatever they would allow girls to play at school in the 1940s and early 50s. Field hockey and netball (English for basketball) were favourites.

She also rode motorcycles, and one day caused her beau Ernie to be thrown off the back of one when she gunned it a little too fast.

Cynthia and Ernie and the boys emigrated to Canada in 1972. Heading south on Yonge Street just after they arrived in Toronto, they hit Lake Shore Boulevard and, being used to driving on the other side of the road, found it simpler to turn right than left. As a result, rather than live on the east side of town, they ended up going west, to Mississauga, where they spent the next several decades raising their sons, and eventually welcoming their five grandchildren.

On January 4th, 2000, Cynthia’s life changed. It started by waking up to find Ernie still in bed. That was odd, because he was always up before her (and often brought her morning tea to her in bed). He’d been saying the day before that he’d been poorly (English for not feeling well), which also was surprising for him given his unshakeable constitution. Well, not quite unshakeable, as it turned out: he’d had a massive heart attack and died in his sleep.

Since then, over the past 13 years, Cynthia has made a new life for herself, moving into a house on her own (for the first time in her life), returning to work part-time (she’s since retired), and volunteering (for the local animal shelter and food bank). She has faced some very dark days dealing with the loss of Ernie, and has only ever hinted at their severity when she once mentioned collapsing in a closet while going through his old clothes. For the most part, despite her soft voice, infinite patience and fondness for dusty rose, she possesses a steely determination that for me is a constant reminder of why the English won the war.

She refuses, for example, to be rushed through a meal, despite the fact that she eats at a snail’s pace. Woe to the server who asks cheerfully but prematurely: “Can I take that from you?”

She also will not raise her voice in a noisy room (which means the poor server has to ask several times about clearing her place before realizing he’s been given the verbal wrist-slap).

She will go head-to-head with anyone she catches abusing an animal. She once berated a thug (read: beard, leather jacket and eye patch) for dragging a puppy along a sidewalk.

She considers black pepper “spicy”, and “well done” the only way to cook meat.

She once said — perfectly straight-faced — of a very large woman stooping to pick something up on a sidewalk: “Some people should never bend over in public.”

She is a woman of surprises. She has the greatest respect for both Maggie Thatcher and David Suzuki. She loves sports like gymnastics and figure skating but can’t get through a meal without breaking a wine glass. She loves My Neighbour Totoro but doesn’t get SpongeBob.

She is a woman who perseveres. When we all went to Disney World a few years back, and gasped our way through an August heatwave in Florida (oh yes… there will be sweat), she cheerfully found the shady spot under the tree while I bitched about the mercury. What’s wrong with this picture, I remember asking myself repeatedly; my English “born with an umbrella in her hand” mother-in-law is happily braving this oven while I’m turning into the Wicked Witch of the West.

She is graciously feminine — and quietly strong. The death of her husband aside, when I battled anxiety and insomnia for several months a couple of years ago, Nana surprised me by reassuring me that she too had experienced something similar “when I went through the change”. Her keep-calm-and-carry-on attitude was a perfect tonic. She didn’t kick up a fuss; she simply told me that one day the adversity would end.

I somehow think Victoria would have done the same.

Rule Britannia. Ode to Nana. And happy Victoria Day everyone.

4 thoughts on “What do Nana and Victoria have in common? More than I thought…”