For most of my life I’ve been a cat person. And don’t get me wrong, I still am; along with Daisy our dog, we have two cats, and I dote on them every chance I get.

But Daisy is… well, words do not quite do justice to how I feel about this dog. Let me say right off, too, that generally speaking, when it comes to animals, I dislike overt sentimentality. Tear-jerker videos. Poetic emails. All the front-page stories about the pandas arriving from China. Gag. While I think part of that stems from having Brown as a last name, I think it’s also to do with the fact that, in the past year, I’ve had a bit of an awakening where industrial agriculture is concerned, and I have trouble at times reconciling our adoration of pandas with how we treat roughly 95% of our cows, pigs and chickens.

But now here I am… about to contradict myself and get all mushy about my dog. On that note, let me tell you a bit about Daisy. 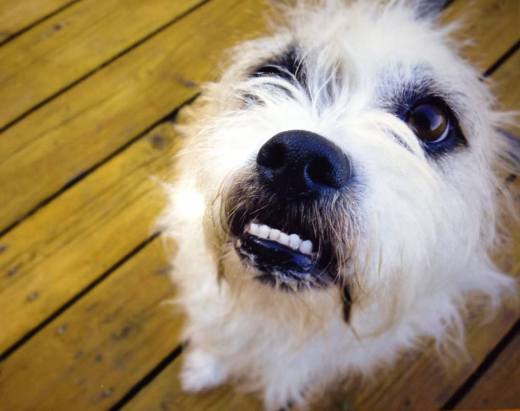 Daisy’s original name was Hermione. (No comment, other than to say someone liked Harry Potter way too much.) We got her from the Toronto Humane Society. We had been thinking for awhile about maybe, perhaps, possibly getting a dog — we had two cats already — and, finally deciding that we couldn’t stand our daughter’s long face any longer, we caved.

So we hopped on the THS website and nosed around. And then down we went to the shelter at 11 River Street.

Of course, you don’t go to the THS just to look. You don’t go in there with the idea of maybe, perhaps, possibly getting a pet. You get one. Period. One of them. Any of them.

We knew the minute we walked in on Friday June 5th, 2009 and heard the dogs barking that we were done. There was no way in hell we were going to come away without taking a creature home with us.

Hermione, it turns out, had been found on the street. A scruffy little terrier mix from, we figured, some sort of a high-rise, because when we got her home, she had trouble with the stairs. She wasn’t quite sure what to do with them, and she was especially hesitant of the stairs down to the basement — they have no risers. To this day she’s still not keen on them. (Mind you, neither am I — they give me the creeps — but that’s a story for another day.)

We also figured she had lived with a loud adult male who had yelled at her, because if Steve so much as raised his voice, she got all anxious and tried to lick his hands and face to placate him. (Now she knows him for the sucker he is, though she still doesn’t like loud men. Mind you neither do I — my father excluded.)

For the first few days we had her, Daisy (the name was the first thing to change) hardly slept for fear of us leaving her. The minute we moved, she’d wake up and follow. Her eyes actually were bloodshot. (I didn’t know animals could get bloodshot eyes.) Eventually, as she became more comfy in her new digs, she started to relax and catch up on her Zzzzs.

Particularly interesting was her issue with food. She wouldn’t eat when she knew we were going out, and overall, she seemed to have very little appetite during the day — instead preferring to wait until evening to hungrily gulp down her breakfast. We eventually deduced that she probably was given food as a distraction before being left alone for long periods of time. She’s still a bit funny about food, and might normally be labeled a picky eater, but we like to joke that she’ll never lose her girlish figure.

Before bringing her home, we had worried what she might be like with our two cats, Fred and Munchkin. Munchkin in particular was a concern. Now deceased, she was quite geriatric at the time; one good chomp from Daisy and she’d be toast.

We discovered — and still marvel at the fact — that Daisy turned out to be the most incredibly gentle dog, one that borders on timid with most other creatures.

Except maybe squirrels. And rabbits. I’ve had the leash yanked right out of my hand and watched that red handle disappear down the street and around the corner after an encounter between Daisy and a rabbit. Thankfully she’s never caught one. (I’ve had many incidents in my life involving cats and birds. “SWEET PEA! SWEET PEA! DROP IT! NOW! Oh God… too late.”) 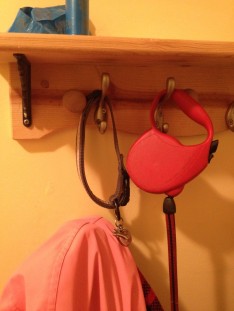 And speaking of leashes, we come to… the W word. Since having Daisy, I’ve learned that all the jokes about dogs loving walks and every walk being the best damned thing are in fact true. Daisy lives to walk. Walkies are it. There is nothing better. As we like to say on her behalf: “A  W-A-K-L in the P-R-A-K. Yes, I know what you’re spelling, and I would L-O-E-V that.”

And she does. From the pre-walk stretchie (bum in the air, front paws extended) and the first blast out the door (complete with perfunctory barking) to the final trot home, tail up and left ear flopping, she gives it 110 percent.

On an average day, we’ll walk around the block, sniffing trees, saying hello to cats, greeting neighbours, and generally checkin’ out the hood.

When we have more time — on the weekend, usually — we go to the park. Oh, the park. The park is heaven. Utopia. Mecca. All wrapped into one. It’s where we run leashless (if no one’s around) and chase sticks and balls. Where we poke our heads into large shrubs and sniff for minutes at a time at (I don’t want to know). Where we explore tree stumps and pine cones and the bleachers behind the baseball diamond. Where we roll in things we shouldn’t (“DAISY! GET UP!”) or steal the deflated soccer ball someone left behind. And it’s where, when we’ve had enough, we plunk ourselves down on the cool grass under a shady tree and pant, just enjoying the day.

Recently Steve told me about a woman he worked with who couldn’t understand the whole notion of having pets. Not “didn’t have time for them” or “didn’t want the work of looking after them”, but just couldn’t see why anyone would want to have animals around.

Woman, what makes you tick? Isn’t that like not wanting sunshine, air and dark chocolate?

I know some people might read my observation and think me naïve. I would say they’re missing out. Simply put, animals make us better people. They teach us compassion, make us less self-centered (especially helpful on crappy days) and they’re generally good for the soul — as made evident by the gazillions of 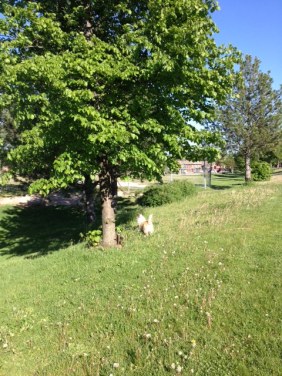 studies on the rehabilitative benefits of creatures, from dementia patients whose sense of recall is sparked by an encounter with a dog, to physically challenged children who ride horses for therapy.

Personally, at the risk of sounding über-syrupy, for me I think it comes down to mutual comfort. I know I’ve made a difference in Daisy’s life, and when I look down at those beautiful brown eyes and see such unconditional love — every day, no matter what — well… she has more than made a difference in mine.