If there is such a thing as a Hallmark card Father’s Day kind of dad, mine was not one of them. He was a big man — six-foot-four — with a loud voice, a short temper, and a penchant for profanity. He was the kind of dad that friends were afraid of.

“Wanna come over to my house?”
“Is your dad home?”

n in our basement (we lived in the west end of Toronto at the time) and Dad arrived home unexpectedly. I suppose my mom must have been there — the boys were young and my parents wouldn’t have left them alone at that age — but when dad got home, everyone scurried like centipedes out back doors and through yards; one kid even climbed out a window.

Not that my dad would ever have hurt them. He was a yeller who just about raised the roof at times, but he never laid a hand on us (excluding, of course, the pre-pubescent across-the-knee spanking — You’re gonna GET it! — that was part of growing up in the 60s and 70s and now is referred to as corporal punishment).

No, Dad was simply intimidating. Adding to his size and temperament were the fact that he was a perfectionist writer — he’d worked in newspapers, then TV, and eventually magazines — and he was a reformed alcoholic.

Just walking around the house, for example, he often would stop to pick up flecks. Bits of nothing on the carpet that, aside from being everywhere, would go unnoticed by most people — but not him.

In the same vein, he would pause at the kitchen counter or living room coffee table and spot some bit of something that a dishcloth had missed, and would spend several intense seconds scraping at it with his thumb nail.

He hated much of what was on TV, especially bad sitcoms with laugh tracks. There were certain programs, in fact, that were simply not allowed on TV in our house, even if he wasn’t watching it.

He had a thing about bodily functions — especially farting. Which always puzzled us because my mother found it hilarious. A good fart joke — heck, the very sound of flatulence — would have Mom in stitches.

Dad on the other hand… We still laugh at the time when, out on a highway somewhere, my youngest brother Anthony made the mistake of letting one go in the car. My dad caught wind of it, and promptly pulled the big blue Buick station wagon (“The Blue Lemon” was his CB handle — operative word being “lemon”) off the road and onto the shoulder.

“Get out.” Those eyes, glaring into the rear-view mirror.
“But dad—”
“NOW, goddamnit!”

Richard and I were one part sorry for Anthony, another part relieved it wasn’t one of us, and a third part delighted that this little soap opera had presented itself in the middle of a long boring drive to Are We There Yet. Was Anthony going to get out? Where would he go? How would he get home? How far was home?

And where was my mother, you might ask? Sitting in the front seat, no doubt, not liking any of it but knowing that this was Dad blowing off steam and that he would never dream of actually leaving one of his children behind at the side of a highway. But he was damned if they were going to fart in his car.

Anthony did get out, and Dad did drive off, leaving The Lone Farter in his Keds and Wranglers to pound the gravel for a hundred yards or so. As I recall, my dad drove just far enough to make his point — whatever that was — and then turned around.

It goes without saying that my dad’s temper bordered on legendary. However, he also had a side to him that, to my mind, more than made up for the outbursts and eccentricity.

He was an optimist, and got a huge kick out of “the little things”. A great cup of coffee. A well-stocked fridge. An impromptu outing — even if it was just to Ziggy’s at Yonge and St. Clair to… restock the fridge. Food played a big part in my dad’s life; it was one of the ways he got off booze, and later became a passion for him, inspiring much of his writing and love of cooking.

He was a motivator — a fighter. The fact that he’d quit drinking — twice, the second time s 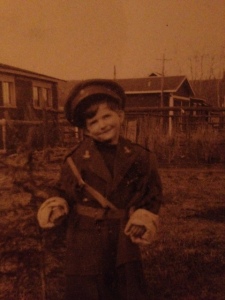 uccessfully — was a testament to his willpower. When I went through a bout of depression in my late teens, Dad was right there, helping to talk me out of it.

And despite his apparent gruff exterior, he had a soft heart. I particularly remember the time he showed up unannounced at the dry cleaners where I worked part-time as a teenager. It was a Friday, 7pm. I remember that because he thought closing time was 7, and had forgotten that on Fridays it was 8. He said he had come to pick me up which, out of the blue, was a little odd, though not out of the realm of possibility. With another hour to go, he said he’d come back, and left. He had acted oddly, and had seemed a bit upset, but the whole exchange had been so brief that I didn’t get a chance to process it and question him.

At 8 o’clock, he returned. This time I could definitely see his eyes were red. Dad? Crying? What the hell was up? It was only then, after I’d cashed out and closed the store, that he told me our cat Midnight had been hit and killed by a car. Dad, who’d initially been against having cats but had relented when Mom simply brought one home, had ended up falling in love with them. And Midnight in particular was a favourite. One of her quirks was her love of cars. She loved riding in them. There were many times Dad would pull up to the Jane subway station, after being summoned to pick us up, and there was Midnight (she was an orange tabby, by the way; my dad named her) sprawled across the dash.

I will think of Dad this Sunday (and his birthday, in fact, is Tuesday), though I will celebrate the day with the other father now in my life: my husband. Though not as temperamental — or quite as tall — Steve definitely has the same soft heart. To all the soft-hearted dads out there, we love you, and happy Father’s Day.

5 thoughts on “My non-Hallmark dad”