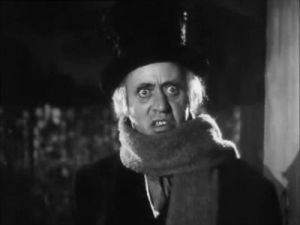 A Christmas Carol. It’s a Wonderful Life. In our house, you’re in either one camp or the other. I’m in the former. I grew up spending Christmas Eves past watching A Christmas Carol. The one with Alastair Sim, of course. In black and white — none of this colourized business. Of course, the 13” Panasonic that sat on our kitchen counter next to the bread box was black and white. But all the better to watch. Every 24th of December, courtesy of Hamilton’s CHCH, the sounds of miners singing and chains rattling served as a soundtrack to my mom baking shortbread cookies and brewing pots of tea while my dad hovered, waiting for the trays to come out of the oven so he could eat the cookies hot.

My husband Steve, on the other hand, has no such memories and therefore is relegated to the other camp. It’s a Wonderful Life is his all-time Christmas favourite. (Bah.) He’s never come out and articulated exactly why he likes it more than A Christmas Carol (despite his being an expat from the Midlands) but my sense is that he finds it just a tad stuffy and slow. (Humbug.)

And it got me thinking: The instinctive preference for one over the other could probably form the basis of a (rather superficial) holiday psychoanalysis. Let’s compare the two:

A melancholy, Dickensian drama set in Victorian England, with ghosts and undertakers and barefoot beggars and even a beloved child who (potentially) dies…

A golly-gee small-town story about an everyman hero searching for the American dream and finding it in his own backyard with the help of an angel and Donna Reed. 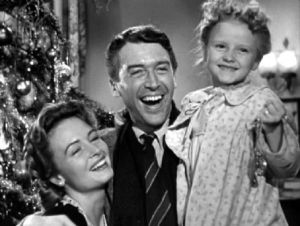 I do believe we’re onto something.

Let’s start with the Christmas Carolers. Chances are they’re traditionalists. Perhaps small-C conservatives. Non-risk-takers. Very possibly Luddites. They eschew new and flashy in favour of old and weathered. If it ain’t broke, don’t fix it is an oft-quoted adage. As for “technology”, it’s best used for (a) Googling factoids used to prove opponents wrong in Trivial Pursuit, or (b) watching English crime and historical dramas that otherwise couldn’t be accessed and that partners would find depressing had they been forced to watch these shows with said Carolers on the same TV. 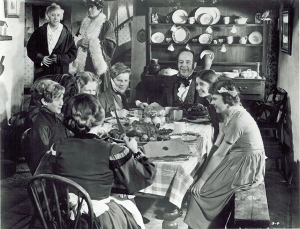 This brings up the point that Christmas Carolers are often history buffs and/or Anglophiles. Dark, grim dramas set against the Industrial Revolution bring warm smiles to their faces. James Watt and Queen Vic are as comfy as old shoes. Lamplit alleys and soot-covered cobbles are dreamt about the way most people fantasize about white beaches and palm trees.

Carolers sometimes talk wistfully about the good old days, conveniently overlooking the fact that these were days without healthcare, universal education, washing machines and Netflix.

They imagine themselves living comfortably in small, dingy flats they see on their favourite U.K. dramas, forgetting that the owners — or rather tenants — of these places often have no hope of climbing a corporate ladder or retiring comfortably or even owning a car.

Their go-to seasonal tune? It’s a toss-up between God Rest Ye Merry Gentlemen and Carol of the Bells.

Now for the other side. Personifying the small-town bustle and wartime energy of It’s a Wonderful Life, the members of this camp tend to be more pragmatic and decisive, bordering on impulsive. Like George Bailey, they’re on a mission. They’re going somewhere. They may not be sure where, but you can bet they’re in a hurry. They’re probably impatient (an attribute that becomes more pronounced around Carolers) and they may even be Type A. (Note: If they’re pure A, they’re probably watching Elf.)

Lifers are typically leaders, managers. They organize. They guide. Where Carolers might consider and weigh and ponder, Lifers do. 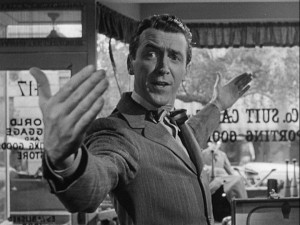 Lifers are interested in world news and current affairs, but prefer to get their information from cnn.com over the World Service.

Lifers like action. Action movies. Action plans. Reaction. Never mind that whiny old guy in the top hat and cravat who’s been dying for half an hour now — enough already!

As one might expect, unlike Carolers, Lifers embrace technology (though they don’t call it that). As one might also expect, they are the ones who come to the rescue when a Caroler finds herself saddled with a virus because of some strange website that promised free, unfettered access to the BBC.

Despite these marked differences between Carolers and Lifers, however, the two can get along comfortably — even at Christmas. For it is at this festive season of the year that Carolers are making extra merry and filling fireplace mantles and book shelves and ceramic bowls with knick-knacks and bric-a-brac and boughs of holly. A smart Lifer, despite his minimalist tendencies, will sit by and, between episodes of Homeland, will grimace quietly but say nothing. To protest is futile. Better to keep the peace and simply resign oneself to the occasional viewing of Downton Abbey. 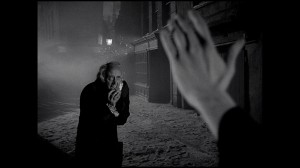 There is, after all, one consolation.

There will be shortbread cookies at the end of it.

2 thoughts on “You are what you watch”