A few days ago I was at the dollar store buying school supplies for my kids (they are in college, btw, but I would buy notebooks and pens every September at the dollar store even if I had no kids). I had dashed out one evening after dinner — one of those weekday dinners that finish at 8pm, and then all you want to do is ‘sit’, but then you’re reminded (by your 18-year-old) that you forgot to get something you said you’d get, so you feel guilty and, despite his fake protests, out the door you go.

So 15 minutes later, I found myself sucked into the Dollar Store Trance. If you’ve never experienced it, it’s when you go in for notebooks and pens, and suddenly find yourself in an aisle of Tupperware wondering how you’ve been getting along all this time without that set of one-fits-inside-the-other plastic tubs.

And what really caught my eye was a laundry basket. A nice, bright orange laundry basket (orange is one of my favourite colours) in a pleasing, sloped oval shape that reminded me of Calgary’s Saddledome and that I knew would fit perfectly on the shelf in the laundry room above the washer / dryer.

Then I remembered: I’d promised my son — the same 18-year-old I was out here shopping for — a laundry basket of his own. To give you a bit of context: he had ‘borrowed’ the laundry-room basket weeks earlier because he likes to keep it just outside his room with his clean laundry in it. That way, he doesn’t have to actually fold anything or hang it up. He simply plucks from the basket until it’s empty, which is his cue to do laundry again. His bedroom is in the basement, so as long as I don’t have to look at said basket every day, four feet from his dresser of empty drawers, fine by me. I pick my battles.

I had told him, however, that I needed the basket back (clean laundry was now being piled on top of the dryer), and I would get him his own basket. I simply hadn’t gotten around to it.

Trouble was, I wanted THIS basket. To reiterate, this would fit perfectly on that laundry-room shelf, and it would even look kind of nice, as far as laundry baskets go. My son could have the crappy old green basket with the broken handle. I wanted the nice new orange one that looked like the Saddledome.

My desires were reinforced when I got up to the cash and the fellow there — he seemed like the owner — said to me, “Oh! I have this laundry tub at home. It’s great! It actually doubles as  a bathtub for my granddaughter.”

Then he started to put my notebooks and pens into it as he rang them through the register. “And see: it makes a great shopping basket too!”

I was sold. And I was damned if my son was going to have it.

But being the devoted mother I am, I spent the entire 15-minute drive home mentally duking it out over this f****** basket.

Guilty maternal self: “Oh, give him the damned basket. It’s a LAUNDRY BASKET for God’s sake. Who cares?”

New millennium rediscovered self: “But I LIKE it! We just spent [BLEEP] on another semester at Sheridan College for him. The laundry basket is MINE!”

Maternal self: “But it’s going to sit on a shelf in a dark room that you avoid anyway. Who cares?”

Millennium self: “But it’s orange!”

As weird (and cringe-worthy) as all this sounds, I know I’m not alone. Motherly guilt is one of those things that, in talking to other moms, I know we all experience to some degree. While it seems to lessen as our kids get older, I’m not sure it ever fully goes away. And it rears its head at the oddest times — especially in early September when the kids go back to school, and the clock of life seems to gear up again: one year closer to graduation (fingers crossed), one year closer to adulthood. (One year closer to moving out. *fingers in ears… LA LA LA LA LA LA…*)

It all makes you realize what’s really important in life. 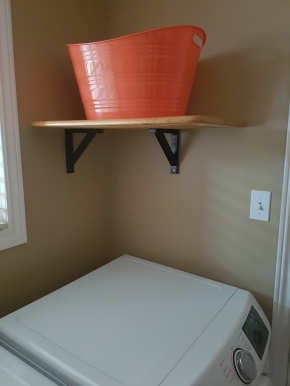